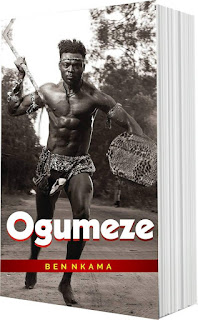 Ogumeze, a defenceless orphan in the protection of a woman, struggles with both natural and supernatural forces to rise to the social rung among his mates. Backed by Osim Okike, the Greatest, he deposes Eze Nnanta, a ruler under whom his people groan like a woman in labour. However, the irony of Ogumeze’s fall leaves an important lesson for humanity.

The village squares were ‘closed’—closed against the women and the ‘efus’. As soon as the sacred shrines of Egbela had been neatly covered with fresh palm fronds, they were required to withdraw their feet, or minimize their frequency, from the open areas. Tradition forbade them to see the men at function after the village squares had been closed. However, to avoid ‘accidents’, some men were stood at strategic points to raise continual cries of ‘Laa! Laa! Laa!’ to scare away the women and the uninitiated.

Ogimeze and some other boys were about to enter the ‘eko’, the shrine of Egbela, for the commencement of their ‘ipu ogo’ ceremony. Meanwhile, they were hidden from the closed village squares as well as they were still considered ‘umu efu’.

“You must run from here,” announced one of the nzes. “You must run as nimbly as the ‘egede’ masquerade. As soon as you hear your name, run. Run without looking back. Run into the ‘eko’. Is that clear?”

“Yes!” the entrants replied willingly, ignorant of what lay ahead of them. Each boy sped off on hearing his name and got swallowed up by the wide open mouth of the ‘eko’ at the village square.

When one of the men positioned at important corners ahead of the entrants saw Ogumeze charging like a bull, he raised high-pitched shouts of ‘Laa! Laa! Laa!’ Ogumeze ran into the enclosed shade and found…