NICE ONE!! ‘We Have New Strategies To Combat Boko Haram’ — Army 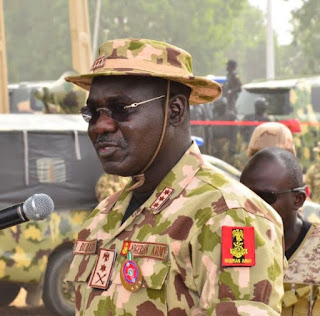 The Nigerian Army says, has made it known that new strategies have been created to counter resurgence of Boko Haram insurgents’ attacks in some communities in Borno.
Maj.-Gen. Olusegun Adeniyi, the Theater Commander, Operation Lafiya Dole, mentioned this to a team of journalists who visited Magumeri, Gubio and Benisheik, headquarters of Magumeri, Gubio and Kaga Local Government Areas of the state.
Adeniyi addressed the troops at the 5 Brigade Battalion.
“Nigerians need to understand that the army did not withdraw from Magumeri, Gubio and other locations in Borno and the northeast, as erroneously insinuated.
“The troops are now on mobility operation instead of staying in trenches in one location; the mobile troops would be moving to take the fight to the insurgents, protect roads and communities so that people can go about their normal life without fear.
“The new measure will enable the troops to dominate everywhere; deny the insurgents freedom of movement, enhance rapid response and render assistance to their colleagues when called upon in good time.
“It is true that the insurgents attacked Magumeri and Gubio; there was no loss of lives on troops and civilians, unfortunately, a member of the Civilian Joint Task Force (CJTF) was killed and six other persons sustained injuries, either from stray bullets, or while trying to escape.
“The insurgents torched some targeted residential homes and public buildings in response to the owners’ allegiance to the government and the nation. Markets stores are stock with food items and other essential commodities but they were not looted or destroyed by the insurgents.
“Gubio and Maguemri are under full military control, the troops repelled the insurgents’ incursion in the communities and people resumed their normal lives. We will continue to protect and provide necessary security to the people,” Adeniyi said.
He said the army had deployed additional patrol vehicles and equipment to facilitate smooth execution of the war against the insurgents.
www.eddaloaded.com