The man you see in the pictures is Mr Rufus Kehinde Daramola of Awo Ekiti in Irepodun/Irepodun local government, with his wife Mrs Esther Ojuolape Daramola who is my aunt and their first daughter Taiwo whose Kehinde died at birth. The man left my aunt with a rich lady when my aunt was pregnant with the twins and returned after several years to apologise and my aunt took him in, they legalised their marriage and had two more children and they both lived inside the 4 bedroom flat my aunt built while the man fled with another lady. The man tried forcing his daughter Taiwo whose name on Facebook is Daramola Haryomikun Timisire to bed thrice chasing her around the house without succeeding and will still tell her not to tell her mum, she never mentioned it until it was time for her to die. Her sickness started in January when she suddenly collapsed in the kitchen and she was rushed to the hospital where they told them she needed blood that her blood has drained. It was so surprising that how can that happen when she never felt sick, since then till yesterday when she finally gave up the ghost, they have been taking her from one hospital to another and giving her blood since her blood was always drained, they spent over a month in Teaching hospital Ibadan and the husband did not check on them,he was flirting around with ladies. While taking her to different churches, all they were saying was that the father has used her already for money ritual,and my aunt said he has always been desperate to get rich and when they confronted him, he said “if she wants to die, let her die”, they reported him to some traditional rulers and they summoned him but he never showed up, rather he took to his heels. The girl finally died yesterday and was buried and yet he refused to show up. Taiwo was 18years and has a striking resemblance with her father who has no known job, it’s my aunt who gave him money several times to start a business but spent the money lavishly, my aunt also bought him a vehicle to use for commercial purposes and he sold it. He has tried raping at least 3 of his wife’s younger sisters and also broke in while the wife was with their daughter at the hospital.Please, help share this post to locate him because he’s on the run. God bless you all and may you all never cry over your children.With the help of Oba justice Ademola Ajakaye, The Oluyin of Iyin Ekiti, the fugitive has been apprehended yesterday. That is him in the pictures (Mr Kehinde Daramola) with his late daughter. Very early yesterday, A Muslim cleric whose name I will mention in my next post with some relatives, opened up that the late girl confessed to them that the father actually slept with her but was afraid of telling her mum for the fear of being killed as threatened by her father. The cleric and some witnesses whom the man had attempted to rape was at the palace of Oluyin yesterday, the cleric told everyone that the man actually slept with the girl with charm. Mr Daramola who has earlier denied being the father of the girl said he never meant it after he was handed over to the police, right there in the palace yesterday, he was threatening my people and i and he never denied sleeping with the girl before everyone yesterday in the palace.The cleric also told everyone that if the man is left to complete his ritual and his money finally arrives that if he still have over a hundred children alive that all of them will die and my aunt still have two of his children.

Yesterday everyone involved in the case were summoned to the police station at Iyin Ekiti including the Muslim cleric from Awo Ekiti whose name is Alfa Ismaila Olohungbebe. The alfa has earlier told us that whenever and wherever his attention is needed he would show up because he is truly a man of God that would never lie as he claimed. The pictures were screenshots from the video recorded at the palace of Oluyin on Saturday when the alfa was summoned. But to our surprise, we called him after the case was handed over to the police and he refused to show up, he said Awo people are after his life for saying the truth, he said he has been receiving all sought of threats and that he would no longer come to us, I personally collected his number and called him and he said he would place a curse on whoever call him again over the case and he hung up,I called back and he declined the calls. Yesterday, the alfa finally appeared at the police station after the police told him he would be arrested if he refuse to show up, his statement was obtained and he was asked to narrate his part of the story. My dear Nigerians, could you believe that alfa denied ever coming to the palace? He said he never visited us and that he never said anything that has to do with the girl’s death. I guess he never knew we recorded everything he said at the palace.
I hope you haven’t forgotten him…. Kehinde Daramola of Awo Ekiti who slept and killed his daughter for money ritual, he has been remanded today. 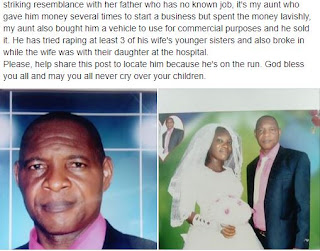 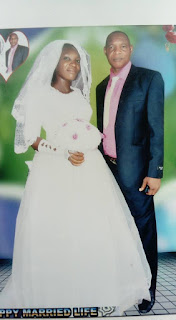 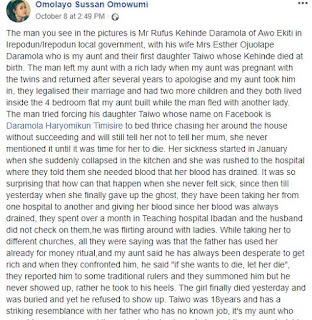 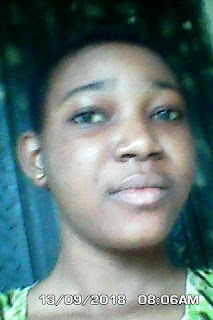