A 23-year old man, Taiwo Olatokunbo, from Ogun State was arrested on 20th October, 2018, for allegedly killing a man simply identified as 32-year old Christian Williams over N200 beer.
The suspect was arrested following a distress call received by the Igbeba Police Division from one Temitope Adedayo, who runs a beer parlour at No. 4 Ijagun Road Ijebu Ode. She reported that at about 3pm on the said date, the suspect came to buy a bottle of More beer worth N200 but refused to pay. This led to an argument between her and the suspect consequent upon which the deceased who happened to be her customer intervened and asked the suspect to pay for the beer. She narrated that the intervention of the deceased infuriated the suspect who then broke a bottle and stabbed the victim on the right elbow joint.
Upon the report, the acting DPO of Igbeba Division, SP Onah Lawrence, led his men to the scene where the said Taiwo Olatokunbo was promptly arrested. The victim was quickly rushed to State Hospital, Ijebu Ode, for medical attention but gave up the ghost while receiving treatment.
Meanwhile, the Ogun State Commissioner of Police, CP Ahmed Iliyasu, has ordered the immediate transfer of the case to the Homicide Section of the State Criminal Investigation and Intelligence Department for proper investigation and prosecution of the suspect. 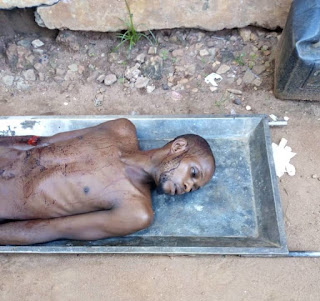