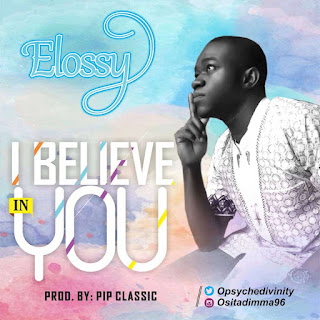 Ositadimma, an up and coming Music Minister with stage name- “ELossy”, started his music career with a pop of passion during the compulsory National Youth Service, had an after release of “Destiny ” as first studio section experience and through, he later went on after a while of suppression as the passion in God, had always been a drive.

“ELossy” releases yet another single “I Believe In You” after the internet release of “Reign In God”. This song had been birthed from the beauty of what Unity can capably create in its diversity, taking an excerpt from the acts of the – “Maker of the World”. Taking into cognizance how all in unism made things be and believed it to be beautiful. And with that believe that the hope assured of God to bring about great and beautiful things forth in our lives individually, as a family, community and nation at large needs our cooperation with ourselves, God and Nature.
>>>ELossy also happens to have done a couple of songs with ” Versatility “-formerly “M-Chris” amongst others like my producer, that had enjoined to brace up the music spirit in its flow through my will.

So therefore, “I Believe In You”, a  pop vocal production tries to eliminate the dashed hope needing re-assurance as craved for in our dark moments, and situations that need revolutionary revival even as Elossy’s vocals moves in expression of heart warming and hope-lifting lyrics tells just a bit of the story.